Too close to call (again): A "fundamentals" look at the US presidential election

Here a few days before the 2016 US presidential election I have updated my own little model (which I call "Bread & The Cost of Ruling") with the most recent data.  My model--which I have developed over the last four elections and which is inspired by somewhat different, but also slightly similar, models by Douglas Hibbs, Michael Lewis-Beck, Ray Fair and Alan Abramowitz--relies on three elements for the explanation of the two-party vote share of the incumbent party's presidential candidate:
Applying the model (through simple OLS-regression analysis) to data for the 16 presidential elections 1952-2012 we get this statistical model:

The explanatory power of the three variables together is quite strong, explaining 87% of the variation in the two-party vote 1952-2012.

In particular, there is the familiar picture of economic conditions playing a large role--here the correlation between economic growth and incumbent party's share of two-party vote when controlling for other factors:


Plugging in the relevant data for 2016 (3.3 pct. average quarterly growth up to and including 2Q of 2016, given that we do not yet know 3Q; 51.3% approval rating for Obama, using RealClearPolitics.com's averages), we get that the Democratic candidate for president (Hillary Clinton) should get ... (drum roll) ...  49.99% of the two-party vote.

Essentially this is as close to a coin toss as possible--although it should be noted that such a use for "prediction" comes with a caveat: In this case the standard error of the estimate (when applied to the 1948-2012 elections) is at 2.28%.

What this means is that the election--in the eyes of the model--should look so extremely close at the national level (disregarding the issue of the Electoral College votes) that we really cannot say who is going to win.  In fact, we should not be surprised by a relatively narrow win in the national vote (with, say, a 2 pct.point margin) for either of the candidates.

This is not really what the opinion polls, the forecasting models and prediction markets suggest and have suggested all year (namely a relatively clear Clinton victory).  However, it does match the tendency in the last weeks of the presidential campaign for the national polls to tighten rather visibly.

If there was a modern presidential campaign where "the ground game" ("get out the vote"-operations) and voter enthusiasm/lack thereof might play a role, this could very well be it.

If on Tuesday Clinton ends up winning more like the opinion polls suggest than what econometric models such as the present one tends to forecast, then the "credit" might very well go to the Republicans and their candidate.
kl. 13.12 Ingen kommentarer: Links

Did Libertarian candidate Gary Johnson hurt Trump or Clinton the most?

It is frequently assumed--across the ideological spectrum--that the presence of the US Libertarian Party in US elections primarily hurts the Republican Party's candidates.  In a new, little note, published as a working paper, I challenge this view with a simple empirical analysis of 196 published, non-partisan 3- or 4-way polls from the 2016 US Presidential Election (from March 23rd to October 26th 2016).

Looking at the data, I do find support for the former hypothesis--thus suggesting that, yes, Johnson does take votes from Trump, although the association is relatively weak.  That is really not surprising, as any "third" candidate is likely to take at least some votes from any of the two major party candidates.  And indeed there is an equally visible negative relationship between Johnson's vote shares and Clinton's. 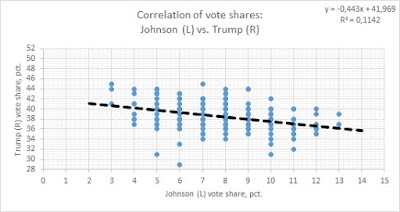 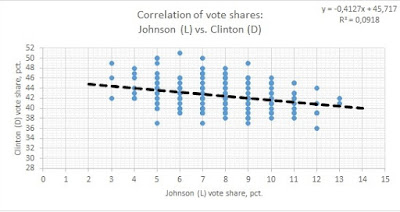 In other words, while Johnson does seem to cost Trump votes, he does the same for Clinton.  Indeed, loking at the graphs and the relevant correlation coefficients the possible "impact" prima facie seems of comparable size.

However, and more importantly, I do not find support for the latter of the hypotheses above.  There is *no* visible positive association between Johnson's support levels and Clinton's lead.  In other words: Johnson's presence in the race does not hurt Trump more than it hurts Clinton. 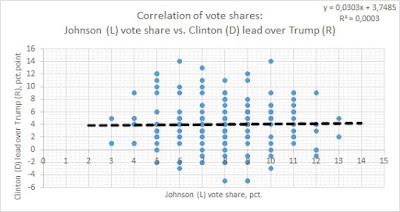 In fact, there are indications (when controlling for time, etc.) that Johnson's level of support is negatively related to Clinton's lead--thus suggesting that he primarily has taken votes from her and thus indirectly benefited Trump.
kl. 00.55 Ingen kommentarer: Links